Oh, is that not… Is spring not the time for reading about bloodthirsty kill sprees? That’s more of Halloween’s forte? Welp, too bad, because April was section 300 in my Dewey Decimal Discovery project, a section which houses the – dun dun dunnn – true crime!

And a bunch of other stuff, but they’re boring. Law. Economics. Politics. Yawn.

I discovered this month’s pick a little differently than the others. Rather than strolling down the library aisles, bent-necked and scanning titles, I found out about this book from someone else. I still consider it a surprise, because I wasn’t looking for the recommendation. A library goer needed help finding this title, and as we walked over to the nonfiction stacks I asked what it was about.

Him: “It’s about this guy who builds a murderhouse in the late 1800s and uses the nearby fair to lure his victims.”
Me: “I HAVE TO READ THAT.”

The killer was H. H. Holmes. He built a three-story apartment building / hotel down the street from the Chicago World’s Fair, complete with an airtight vault, crematorium, and outlets for gas to be pumped into tenants’ rooms. A wholesome, family-friendly place.

If you’re prone to nightmares, fear not, for this was as gory as it got. No brutal slaughters here – most of his victims went by suffocation. After their death, he would have their tissues professionally removed, then sell their skeletons to universities.

The intriguing part was how patient and calculating he was in his process. Holmes got a kick out of marrying his victims before he killed them. He would meet a young woman fresh out of her hometown’s security blanket, tip-toeing her way into the big scary city, and take her under his wing. After making himself utterly irresistible to her, they’d have a hush-hush marriage, a few more months of domesticity and trust-building, and then…

This was easy for Holmes, and he did it a lot. Larson describes him as charming, warm, sympathetic, and generous. Also handsome. Verrrry handsome. The Leo DiCaprio of 1880’s Chicago. (Fitting – that’s who’s playing him in the film!) And he was a bad boy too. He would touch women when they spoke, a scandalous thing to do before courtship in that time, drawing them into his piercing blue gaze as he listened intently to them.

Oh my. Is that a hacksaw in your pocket or are you just happy to see me?

So how did he build this murderhouse without any workers saying, “Hey uhhh boss, I’m not sure these head pikes are up to code”? Simple: he accused his workmen of shoddy construction and angrily fired them, then hired more, so that each builder never got the full context of what he was doing. And also never got paid. Because not only was Holmes a killer, he was a talented con artist. He barely spent a dime, ordering tons of items under aliases who conveniently were never around when bill collectors came to call. Somehow the guy always weaseled out of it. That’s how charming he was.

I’ll stop there with Holmes, as I don’t want to spoil everything that happens. As for the World’s Fair, I skipped a lot of those chapters because they were all about architecture – like, really about architecture: what kinds of materials they used, what the ground foundations were like… So, I skipped those, but here are some interesting things that premiered upon the Fair’s opening:

~ Aunt Jemima pancake mix and shredded wheat cereal. One person joked that the shredded wheat was more like shredded cardboard.
~ Belly dancing in America. Many Americans had never witnessed it before. Also introduced was that iconic ditty that you always hear in cartoons when someone with a flute is luring a snake out of a basket. They needed a Middle Eastern-sounding song but didn’t have any, so some white dude tapped the tune out on a piano and said, “Here.”
~ Electric street lights. Larson describes a moment one evening when all the lights flicked on at once, and how it shocked the pedestrians. “But where are the candles?” they asked.
~ Sound recorders. “A metal box that stores voices” was listened to for the first time by the public.
~ Ferris wheels. The very first one was built for the Fair, its story being a large part of Larson’s book. Here’s a photo from Wikimedia Commons: 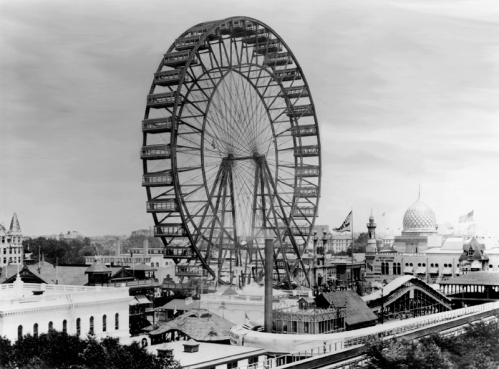 And I’ve just realized that two of these Dewey posts in a row have ended with a Ferris wheel, ha. That’s it for today – join us next time for something slightly less murdery! Maybe!